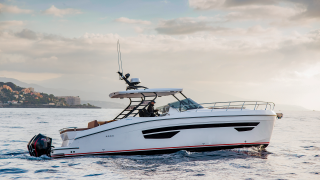 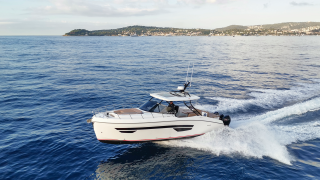 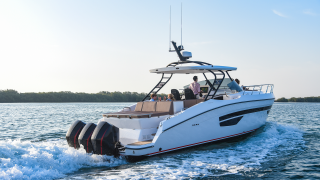 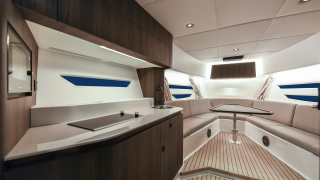 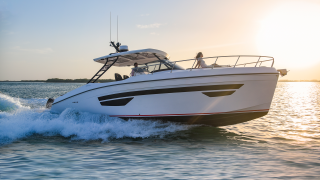 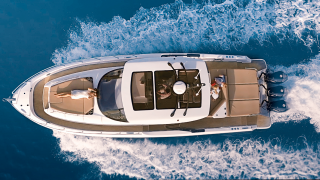 Oryx 379: On Board the 12 Metre Tender by Oryx Sport Cruisers

Once out of San Lorenzo al Mare on Italy’s Ligurian coast, there is nothing but clear water upon which to discover whether the Oryx 379 is more than just a styling exercise. “I’ve had a hand in everything within the shipyard but the Oryx is the first project I’ve taken from concept through to production ramp up,” says Hussein Alshaali, research and development manager at Gulf Craft.

He began his career at the UAE shipyard more than 10 years ago, and is the man behind the design and engineering package for the 379. The boat is the latest offering from Oryx Sport Cruisers, a Gulf Craft brand. It was developed for the European market while also providing for its loyal Middle Eastern and Asian client base.

The 12 metre is certainly a departure in look from its predecessors, the Oryx 36, 42 and 42 Flybridge. The model – with its exterior styling and detailing inspired by the head and horns of the oryx, a species of antelope – offers more of an open-plan, European vibe while retaining some of the design DNA of its sister models. Its sporty look is paired with three 300hp 4.6-litre V8 Mercury Pro XS outboard engines. As I step aboard they come to life with a growl reminiscent of a sports car, revving on ignition before settling down to a quieter rumble when idle.

From 20 knots, I begin to increase speed in increments of five. Each time the throttle is applied, the torque from the engines delivers an instant response until we hit a top speed of 44 knots. Blasting along the coast, the fully FRP boat rides well over the waves. “Below the waterline, it is a little different to what we’ve done before,” says Alshaali. “The greater length of the waterline gives you a smoother ride especially in short chop, which is the most uncomfortable part of boating.” This in turn helps to reduce slamming and allows for a smooth jump from one wave to the next.

Should you hit a wave awkwardly, however, your back is spared the full impact thanks to a couple of Shockwave S5 seats at the helm that sit either side of the throttle in a similar configuration to racing boats. These seats can be swivelled 360 degrees to allow an owner to turn and face friends seated on a corner sofa. Aft of this seating is a sunpad, with a second one on the foredeck.

“Having a vertical bow also helps with comfort, as it brings your hull entry much closer, which allows you to catch the chop earlier,” says Alshaali as we return to the marina. “Another reason for this type of bow is that it gives you more volume on the inside. It is an area that would otherwise just be air.”

This benefit is clear to see in the saloon, which provides good head height and a large seating area at the bow. The interior also offers a compact galley and a spacious dayhead and shower for this size of boat, with a double berth located amidships below the helm. With the table in the forward seating area lowered, this configuration can sleep four. A second layout option can accommodate up to six, with both versions offered in a sycamore or walnut interior finish and a choice of five fabrics from ATN’s Tessaro vinyl range.

“We’re building layout option number two right now,” says Alshaali, who confirms that seven 379s have been sold. “A lot of people have commented on how they like having a closed cabin, especially in the Middle East. In Europe it is completely different, as people love the openness of layout option one. So we are working on how to make it all work with an enclosed cabin forward. Obviously, the saloon will be a bit smaller but we think we can turn the saloon sofa into a sleeper so that we can berth six with option two.”

Meeting the demands of multiple markets with different climates and cultures is not an easy task but Alshaali and his team have created layouts to meet the majority of client wishes regardless of region. In addition, buyers have a choice between an outboard or inboard engine package (boat price starts at $231,000 without engines). The former allows greater storage facilities where the inboards would otherwise be mounted.

“The biggest compromise with having outboards is the swim platform, which is another critical area,” says Alshaali. “In Europe they really value this platform because a lot of time is spent in and out of the water. Whereas in the Middle East and Asia, I think people aren’t as concerned with swimming off their boats but prefer fishing, partying, sightseeing etc, so outboards make more sense there.”

The carefully considered design has already caught the attention of buyers and looks to be a strong model for the Oryx brand. We’ll see the next chapter in its story with the launch of the next boat in the range at the Cannes Yachting Festival in September.

DreAMBoat: On Board the 90 Metre Oceanco Superyacht

Oryx 379: On Board the 12 Metre Tender by Oryx Sport Cruisers

F//LINE 33: On Board the New Fairline Boats Tender